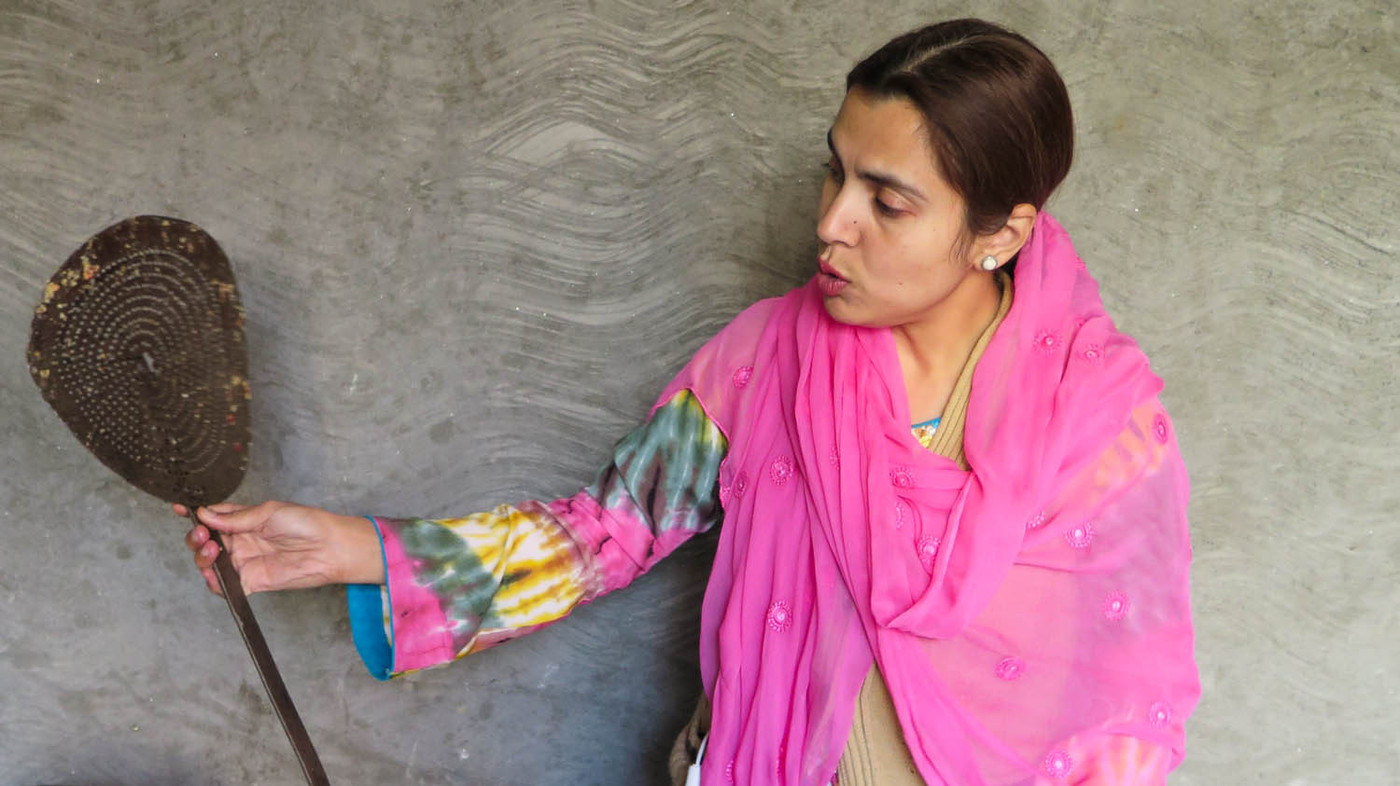 Published in Herald – Person of the Year feature; cover photo by Philip Reeves

At the somber office of the Punjab Food Authority, in a smallish driveway, a kid whacks ball with bat. Inside, a lone staffer sits by a door that reads ‘Director (Operations)’.

‘Madam Ayesha Mumtaz is usually in the field,’ he says, and as much is obvious: the lady is not your usual desk warrior. The gentleman now sighs, ‘Ay Mussalmanon, kyun har cheez mein malawat kertay ho?’

A strange statement to make: while adulteration is on the agenda here, one expects bureaucrat-speak over bible tongues. Yet all is made clear when the boss arrives, and the office sweats in deepest December. It becomes evident this is no ordinary government drive – this is a mission, and the messiah could save our souls (or at least, our innards).

When Ferdinand founded the Inquisition – to maintain Catholic orthodoxy over an uneasy Spain – desperadoes would roam among the converts, to purge the wicked and unclean. Pop culture turned it into a faceless, fathomless dread. ‘No one expects the Spanish Inquisition,’ goes the comic saying.

But everyone expects the Director of Operations, having inspected around 12,000 eateries in her 187 days, averaging 64 a day. In 2015, this bureaucracy became a blur: the PFA put up 27,174 improvement notices, sealed over 2,600 premises, and made 384 arrests – the kind of thunder that shook even Lahore awake.

Yet there were few forecasts of the director’s success. A career civil servant since 2001, she landed in an unheard-of bureau last June. Armed with what she calls ‘zeal and zest’, Ayesha Mumtaz has since inspired envy, anger, and at least two criminal impersonators.

How she did it is easy to understand – the lady does not discriminate. Targeting everyone from Gloria Jean’s to Gawal Mandi, she says, ‘I find it shameful that we distinguish, between people, the application of law in this country – to let the weakest go to the wall.’

As to her work, she describes the basic ingredients (if one forgives the expression) as three-fold: God, humility, and pure intentions. Unlike today’s public servants with their mile-long motorcades, the lady is content with her bare office and its blank walls.

‘Kaanay ho toh kisi ki ankh mein ankh nahin daal ke dekh saktay,’ she says. ‘One must have the audacity to confront these people. We won’t succumb to pressure…it is not in my dictionary. When sifarshis used to show me their card, I used to say the bigger the card, the bigger the snubbing.’

In a way, the director is the Great Incorruptible, to crib a title from Robespierre. And the Terror of Ayesha Mumtaz, spoofed in the news and serialized in text messages, is only too real. ‘Northern Lahore has a culture of its own,’ she says. Ladies that sighted her in the midst of her raids began beating themselves and crying, ‘Haye marr gaye, lutt gaye!’

Lo Ayesha Mumtaz did not fear them – for, she tells us, she fears only God. ‘Any jackals that think they’re lions, step forward,’ the director called out. The crowd shrank, shriveled, and died.

This is to be expected: the PFA often finds itself in the heart of Lahore, a city with food in its heart. During the recent urs, the death anniversary of the beloved Data Ganj Baksh, the team burst in to fence off any possible outbreak. As it moved to seal the Pakwan Centre, an elderly citizen came out crying, ‘Hang me, why won’t you hang me and be done with it?’ The man’s cries caught on, and the locals gathered.

Interest gave way to anger, and the crowd gave way to a mob, hooting for their hero. ‘Try shutting it down!’ they jeered. The director and her food safety inspectors were surrounded.

Lo Ayesha Mumtaz did not fear them – for, she tells us, she fears only God. ‘Any jackals that think they’re lions, step forward,’ the director called out. The crowd shrank, shriveled, and died. Pakwan Centre was sealed.

Besides her belief in the divine, experience has helped: as the first female District Officer, Lari Adda, Ayesha Mumtaz faced off the trucker mafia. Indeed, the director’s moral indignation at any and all mafias borders on the Bobby Kennedy-esque. And like the doomed attorney general, she refuses to relent ‘until the mafia realizes it’s over for us.’

But the director has had to contend with swanky lobbies first: the Lahore Restaurant Association has moved against her in the High Court, staying her hand from uploading photos of their premises – the same that shocked the country.

‘We respect the court, so we’re not uploading any photos; the petitioners’ or otherwise,’ she says, referring to a tableau of blood, grime, and fecal matter. ‘So now they think, let’s keep lingering the case on until the madam leaves.’

The director is also amused by the defence – that their reputations have been savaged. ‘They never challenged the actual fact of those pictures, that they were false or mala fide. Instead what’s paining them is that we uploaded them in the first place; filth that could be seen by the naked eye. It’s an indirect admission!’

Younger than our vintage-era babus (those that employ human keyboards on government salaries), Ayesha Mumtaz understands connectivity, and is hampered by its loss. In her book, judgment is rapid: the Almighty doth not do stay orders.

‘There are no lawyers in the Hereafter,’ she says. ‘God decides then and there.’ As for the petitioners, the lady’s puritan streak shines through. ‘When I see their faces, my blood gets up,’ she says. ‘Who do they think they’re representative of? Certainly not Lahore; it’s the same four places from M.M. Alam [Road]. That’s where they start and end…posh places think they’re above the law.’

Feeling the heat of the director’s fury, the LRA has more bones to pick: that the restaurant boys are all honourable taxpayers, and that the director is no food technologist. When challenged, the director again acts contrary to our officialdom – she doesn’t parry criticism as much as she bulldozes it. ‘Either pay tax or be put away; they don’t do us any favours,’ she says. As to qualification, she acts solely in her administrative capacity. ‘Is the Secretary Health a heart surgeon? No, he’s looking at service structures and system transfers.’

Nor does she sally forth without trained food inspectors in tow. During an iftar raid at a famous coffee chain (the PFA is as likely to storm in at midnight as it is at high noon), the director discovered expired syrup bottles from 2012. The excuse – to display what bottles from years ago looked like. ‘I thought this was a coffee shop,’ the director said, ‘but you’re selling historical artifacts.’

When it comes to her raids, the director has a dark sense of humour. ‘I tell myself I’m not in the Food Authority, I’m in National Geographic,’ she says. During one reported inspection, she asked the management whether it used the deep freezer to bury their dead.

Much of the blitz is courtesy the (otherwise nervy) Punjab government: the director has carte blanche, with ‘not a single phone call’ of intervention from the famously food-centric Muslim League.

Yet whatever the Raiwind Rulebook, could this become another cliché: individual over institution? To hear Ayesha Mumtaz, her effort is institutional – the PFA is mulling expansion in all directions; drawing up second shifts, divisional taskforces, and branching out in the rest of the province. It has discarded thousands of liters of bad milk, ceased the en masse slaughter of sick animals, and trampled on the don’t-ask-don’t-tell pact between the lazy foodie and the lax restaurateur.

Their leader bears witness – rats in the urinals, roaches in the chillers, shaving kits in the kitchen – and she points to matters societal: a broader culture of bad hygiene got us where we are, from Lohari Gate to Akbari Mandi. ‘That’s where the resistance is,’ she says. ‘You show up there, and all of a sudden, there’s locks on all the gates and everyone’s disappeared…they say their fathers’ fathers did it, and so should they.’

But even as the director smashes our idols, she also shatters our conventions: as a female officer in the field from dusk to dawn, and as that rarest of unicorns: a civil servant improving the lives of our citizens. More than any government functionary in 2015, Ayesha Mumtaz repaired the people’s faith in service delivery. Thus her nomination for Person of the Year; thus her status as a one-woman wrecking ball.

Asked whether protecting the culinary concerns of 100 million people was overwhelming, the director smiles. ‘I feel thrilled.’ This is more of the old world zealot, but that may be missing the wider picture.

Part of the adulation Ayesha Mumtaz inspires is because she stands at the intersection of all that Lahore is about: food and politics, in that order. And to hear a famous playwright describe the latter, they may be one and the same, ‘This is gastric juices churning, this is enzymes and acids, this is intestinal is what this is, bowel movement and blood-red meat – this stinks, this is politics […] the game of being alive.’

And by exposing the game’s rotten underbelly, the director may have brought Lahore back to life.