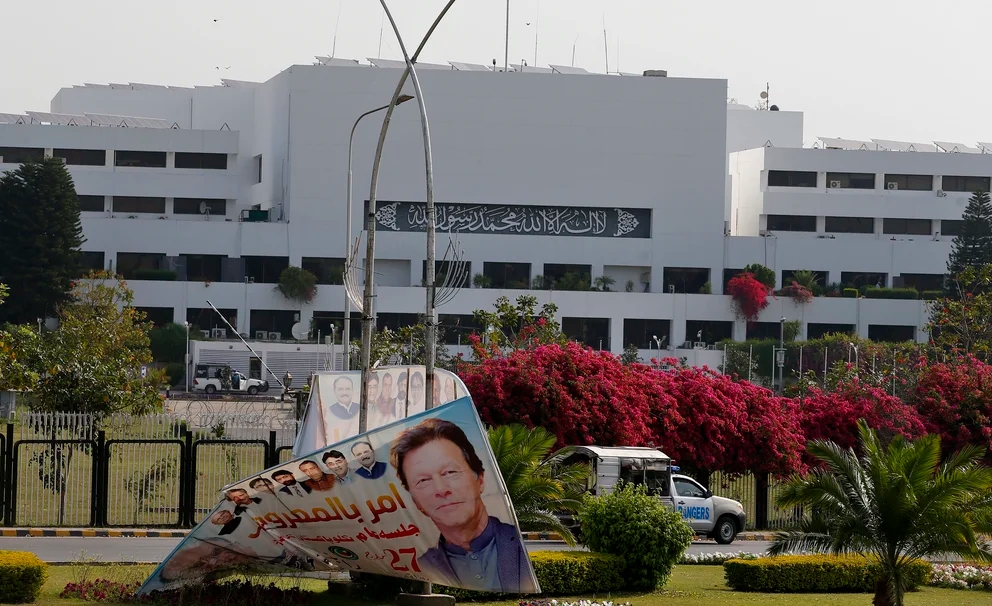 What a Sunday. What a crisis.

On the day of the no-confidence vote against the prime minister, Fawad Chaudhry – fresh from the law ministry’s holy water – spoke of a conspiracy, as well as Article 5, which demands a citizen’s loyalty.

The camera then cut to Deputy Speaker Qasim Suri, watching expressionless, before yelling out his rejection of the no-confidence motion. Minutes later, the prime minister dissolved the assembly. And just like that, the 15th parliament was over.

Until it wasn’t: the Supreme Court took suo motu notice, and declared that all would be subject to its order. Once again, the fate of parliament will be decided by the Court.

But before looking at the legalese, let’s see how we got here. This contributor had long maintained, in keeping with Pakistan’s evolution as a parliamentary republic, that the PM should complete his term, unlike all before him. A vote of no-confidence, while legal, was unprompted by any new events.

Except one: the sound of the same page tearing. After Notificationgate, the establishment put up a sign of newfound ‘neutrality’. The PTI saw this as repudiation; the opposition as an invite. A no-confidence resolution was submitted on 8 March.

Soon after, the PM alleged conspiracy. As per the Speaker’s eventual ruling, Islamabad received a cable on 7 March from Pakistan’s ambassador, who’d met a foreign official. That official, per the PM, was Donald Lu, assistant secretary of state under Joe Biden. We still don’t know, beyond what’s implied, what exactly was in the cable.

As with most Drobama-Biden scolds, whatever Lu said was ‘undiplomatic language’ and ‘blatant interference’ per the National Security Committee. The NSC nonetheless didn’t point to our parliamentarians as complicit.

In fairness, the Speaker’s ruling didn’t go much further either: it said there was an ‘apparent nexus’ that needed ‘to be clearly settled first’ whether our citizens were colluding. It called for an investigation to determine complicity, ‘if any’ in this ‘unholy venture.’

Of course, we’ve a long history of foreign interference, whether it be Raymonds here or native informants there. In 2011, as determined by Justice Isa, one of our own Excellencies was found writing memos to the US seeking foreign occupation.

But even ignoring the local triggers to no-confidence – from the same page falling apart, to Usman Buzdar in Punjab – the Speaker himself has called it a case for further probe. So, while it’s hardly unimaginable that the US wouldn’t like a noisy anti-American in charge, and would say so through droids like Donald Lu, the centre hasn’t yet provided any material implicating the opposition, at least beyond meetings with diplomats.

Why complicity is important is because the Speaker’s ruling was initiated by Fawad’s reference to Article 5 – loyalty to the state.

Presuming that a foreign conspiracy was set in motion to overthrow the PM, a probe should have been moved well before 3 April, to prove (or disprove) collusion. But we only have the facts as they existed on 3 April, and accusing scores of parliamentarians of disloyalty has to be backed up with more than an undisclosed cable that so far doesn’t mention the fact of their complicity.

Similarly, the opposition crying treason – in a land where even Pervez Musharraf’s conviction was frustrated – is a joke. Treason was for when the general ordered mass arrests, kidnapped judges, and forced emergency. Mr. Suri’s act was a howling disaster; treason it wasn’t.

We turn now to the laws that apply: the explanation to Article 58 is clear – the PM can’t dissolve the assembly when ‘a vote of no-confidence has been given…but has not been voted upon.’

That brings us to 3 April: to try and get over that bar, the Speaker first knocked the vote out of the assembly, and then the PM dissolved the House. But no actual vote had taken place, nor does the Constitution provide the Speaker the power to reject such a motion or, for that matter, restrain elected lawmakers from voting. If what Mr. Suri did was right, then any such vote could be torpedoed as easily.

Defenders nonetheless cite another law, Article 69, which excludes the Court from questioning parliamentary procedures. But the Court has held again and again that it can take up the legality of the Speaker’s actions. So while 69 is a hurdle, it can also be stepped over.

Law aside, why Mr. Khan did this, and why the PML-N is presently recoiling from insta-elections, is clear: to prevent a Sharif-Bhutto coalition ‘managing’ the system before the polls – from reversing e-voting to closing criminal cases to appointing a new army chief.

As for constitutionality, Mr. Khan’s people point to Sindh House, to an absurd father-son dynasty as PM and CM, to the repulsive creature accused of Nazim Jokhio’s murder flying in to vote.

But breaking the law mustn’t perpetuate breaking the law: what Mr. Suri did was a plainly obvious violation, and must be set aside – for the sake of our parliament and, by extension, our progress.